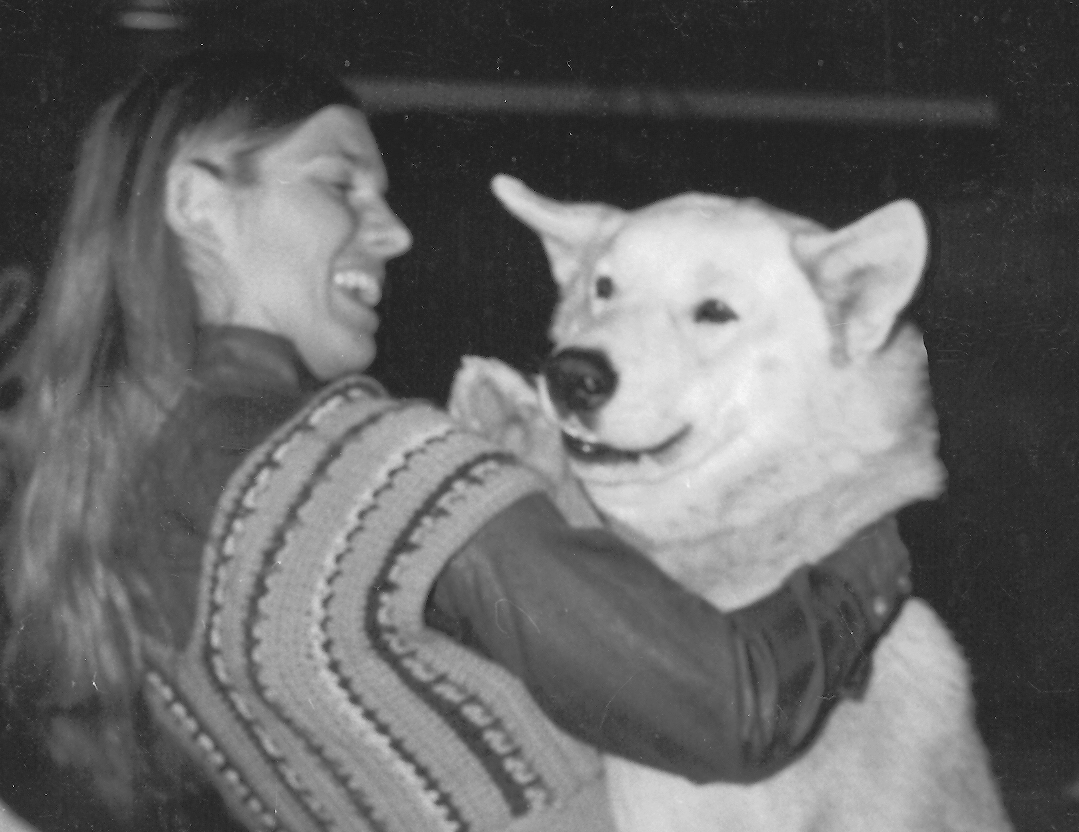 Portrait of the Patriarch as a Young Mutt

Kids, puppyhood will soon be over. Yes, the time has come, according to your mother, for the Old Boy to tell you what to expect. You won’t be puppies forever.

My puppyhood? You want stories from my puppy days? Don’t you want stories about your naughty mother? Okay…the good old days, so called…settle down, now. Cuddle close, and listen.

When I was born, I was supposed to be a City dog, yarded, penned, domesticated, petted, raced, brushed, doctored, inoculated, medicated, photographed, bedded down—a fancy-life canine. You little wolfy dogs wouldn’t even be here if Something Wonderful—and Something Terrible—hadn’t happened when I was just a baby.

No, I won’t tell you about the Something Terrible! Grandpaws aren’t supposed to scare the ears flat on puppies! Well, all right, the Something Wonderful, then. Just until you fall asleep.

I’d noticed, as soon as my eyes unglued themselves on what my mother said was the ninth day of my noisy, sucking, milky baby life, that we were all adorable, my seven siblings and I. Just as adorable as you, Puppies! How did I know? Seelah, you’re such smartypaws, aren’t you?

Of course I couldn’t see myself, nor had the humans introduced us to mirrors yet, but I must have looked a lot like my brothers and sisses, with snub muzzles, bright eyes, and the softest fur imaginable arranged in cute masks on our faces. Yes, yes, just like you! (Lick, lick, yes, I love you all. Ow! Chimo, let go my ear!)

Even our mother was not proof against the onslaught of our eager little warm tongues licking her muzzle. “Oh, all right,” she’d say, and either cough up the latest food goodies, if she had any, or subject each of us to a bath, just as your mother does for you.

The humans came around the puppy pen a lot, and they always made that sound that means they want to pick you up and squeeze you: “Aww….”

Oh, we were cute—no doubt about that. So darned cute that, about the time my mother wanted to stop letting us have her milk, my bros and sisses started disappearing. One of the young humans would arrive and start the “Aww” routine, and before we knew it, little legs belonging to a brother or sister would be kicking madly above us, struggling their way out of our lives. First Sylvia disappeared, and then Phil.

I guess I wasn’t the cutest of the bunch.

After that I hid under the bench in the corner whenever any humans but our own harmless ones came near us. I turned my face to the wall. If being cute and licking one of these young apes with my sweet little tongue meant I was going to be kidnapped, well then, I was determined to be the ugliest, snarliest, most stubborn pup ever. I’d even bite one of these young apes if I had to. Anything to stay with my dear mother!

Mom took us on little hunting trips at night. We were about seven weeks old then, the four of us who were left. She grabbed each of us by the scruff of the neck and leapt out of the pen, once, twice, thrice, four times. “Oof!” she complained when she took me out. “You’re so heavy!”

She instructed us to follow her in line and off we trotted, me at the rear. It was scary in the dark. We couldn’t see so well as in daylight, since our eyes rely on the flash of movement or the contrast between light and dark. Well, at night everything’s light and dark, so that makes for really lousy night vision. Everything was moving. “Wolves should hunt by day,” said Mother, “but this way the humans won’t stop us. Their night vision is worse than ours.”

I was eager to hunt. Mother taught us the differences between dead stuff and live things, the edible and the disgusting, but I was anxious to get on with hunting something down, like a real wolf. Lucky me—I was the first to see prey! I charged off happily after a flash of fur disappearing behind a porch, and my siblings followed. Around the corner of the house I stormed merrily and—darn it! a dog barred out way, snarling and swearing.

Well, at least I did the right thing—down on my back, showing my belly and peeing a few drops. He snarfed and snuffled, peed on the nearest bush, and grumbled at me to leave his cat alone. I thought Mother would tear a strip of fur off me.

No, Taku, that wasn’t the Something Terrible that changed my life. I’m not going to tell you tender-eared pups that part, remember? Just the Something Wonderful. You pups distracted me. Here I am, wallowing in memories of puppyhood.

The humans never knew about our night hunting expeditions. Mother brought us back by daylight every time, neatly jumping over the fence, once for each pup swinging from her jaws.

Every expedition, there were fewer of us, until finally only George and I were left. Heh heh, I thought, this is good! For I had heard the little girl human wheedle her parents into agreeing to keep the last pup. I was determined to beat George out of that position.

Nobody came for awhile, and we were well into our third moon before fate arrived in the guise of a pair of young ape bitches, sisters, looking for a dog for one of them.

This is it, I thought, immensely relieved they didn’t both want a pup. Bye bye, George! I scrambled under my bench again and turned my antisocial face to the wall.

There wasn’t so much of that “Aww” stuff this time, but I heard a lot of serious conversation with our humans, and the word “wolf” was said several times. George, the sucker, got a lot of petting and admiration, but I refused to come out. The little girl crawled under the bench to cajole me, but I planted my paws. And Bill was too big to get under the bench. I figured I had it made.

Finally all fell quiet. The young women left, and I came out and kissed everybody. “You little scoundrel,” said Bill fondly. “You just don’t want to leave us, do you?”

To my surprise, George was still at home. I failed to realise the significance of this until we were out in the yard, having a rambunctious session of Crazy Caribou in the snow a little later that day. I was in a fine tailspin when I heard a stranger laugh, and stopped dead in my tracks.

Hanging over the fence was one of those pesky young female apes. She grinned at me the way they do and said, “So that’s what you look like! You’re a beauty, big boy!”

Scared and foolish, I scurried back into the porch and under my bench, shaking in my furry boots. I had a sinking feeling that she preferred me to George. I’m not coming out of here, I vowed, until my mother comes to tell me George is gone. And then I fell asleep.

I had nightmares about huge noisy flying machines, clanging doors, chains and leashes, and my mother’s sweet face through frosted glass, unreachable. Then the noise of kibble rattling into our big metal dogdish penetrated my furry mind and I staggered out, tummy rumbling.

I stumbled right past the young human ape, sitting there in the cold in a parka and mukluks, before I realised I’d been had. Too late: I couldn’t retreat past her legs now. I couldn’t think of what to do except lie down and make myself as small as possible, ears flattened in dread. Sure enough, she reached out a hand to my muzzle.

That’s when I made the fatal error, or, if you like, the Something Wonderful happened. I could not resist sniffing the proffered hand, and it smelled good! In fact, more than good: kind and strong and mumsy. I felt like licking it, but I wasn’t that far gone. Yet.

But she was. She was an alpha, of course, like me, and so she just reached out and took me by my scruff and hefted me onto her lap. My mother had neglected to tell me what to do if an alpha human did this. Okay, okay, obviously one pees when an alpha wolf or husky gets a little testy, but an alpha ape?

I decided not to pee or whine or lick or do anything but maintain a glacial calm. She arranged my paws and muzzle on her shoulder and put her arms around me, warm and strong. “I like you, you stand-offish little wild thing,” she murmured.

“I know you’re shaking inside, puppy, but you’re just too much of a prince to admit it, aren’t you?”

The hell I am, I thought. I am perfectly calm. Then she scritched me behind the ears and under the chin and on the chest, all those places one can never reach, and finally she did something really wild—she put her lips to the tender spot between my eyes, where my fur is especially velvety, and made a kind of smacking or sucking sound, not unpleasant, actually. You puppies already know, that’s how humans kiss, because their tongues are too short to do much licking, while their lips are more useful than ours.

She whispered, “I know your true name, Puppy. It is Amaruq!”

The three syllables of my True Name reverberated through every bone of me, and in that moment I forgot I had ever been the puppy Sojourner, and I was hers forever. She knew my name: she must be my Pack Leader, female or not.

She stroked my fur, did that funny lip business again between the eyes, set me gently on the floor, and was gone.

I came to my senses to find my mother watching me keenly. “If I didn’t know better,” she smiled, “I’d say you were in a state of bliss!” I just nodded, helpless to reply. My mother, who was always a bit too intellectual, carried on: “The kind very few wolfdogs find,” she lectured, “a very special interspecies relationship….” She saw I was not taking this in. “You’re a lucky pup,” she said, licking me swiftly and effectively. “And don’t worry: she’ll be back soon.”

She was. Days later, I heard her step on the stairs of the porch. By this time I’d recovered from my euphoria and was back to hiding under the bench, but she had me figured out by this time. I can’t say I resisted much. She talked with Bill and then scooped me up and placed me gently on the front seat of her big, noisy car, right beside her, where I could watch out the window as she drove.

I knew I had entered wolf-husky heaven at an early date. That, Taku, was the Something Wonderful in my life, and I hope it happens to each of you, too.

How to Keep a Human is the first book of True Woods Tales.

How to Keep a Human wolf-dogs